Some of us have kids, too… And we really do know what it ‘s like to bear two weeks of a sulking teen without access to their iPad – as will be the case in Cuba. Thus, it’s activities to the rescue! Havana’s stunning colonialism might not go down too well with the kids… until we get to the Hotel Nacional, famed for its connections with the Mafia. Next in line is the Cubykes adventure – the Cuban ride of a lifetime – loved by both young and old alike. After the fun in Havana, don’t forget to zip-wire in the leafy canopies of the Las Terrazas, with some horseback-riding to follow. What next? Nothing beats a cold shower under a waterfall and a refreshing swim in a natural lagoon…Hopefully by then you’ll have exhausted the young ones enough to enjoy a quiet time on the beach. 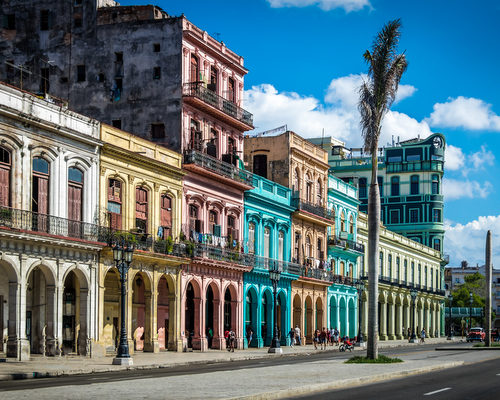 Meet & greet at the airport with your English-speaking guide or our airport representative and transfer to your hotel. 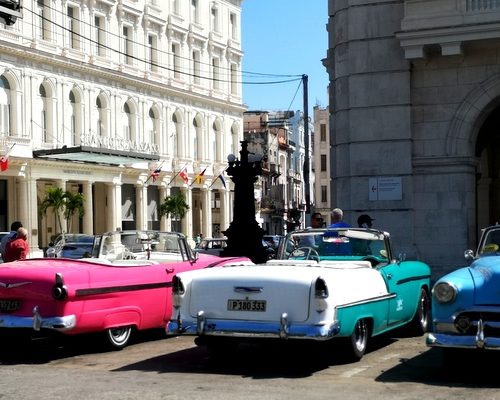 In the morning pick up at your hotel by your private, English speaking Cuban guide. Transfer to the old city by the original Coco Taxis, in case your hotel is located in Vedado. The day starts with a walking tour through colonial Old Havana with its most important sites: Calle Obispo, Plaza de Armas with Palacio de los Generales, El Templete and Castillo de la Real Fuerza. Cathedral Square with Hemingway’s nearby “Bodeguita” and the “Old Square” Plaza Vieja. Lunch in one of the popular private restaurants like “Dona Eutimia” or “La Moneda Cubana” near the Cathedral Square. In the afternoon, a classic American car with driver is waiting for you for a tour through the Havana of the 1950’s along the Malecon to the Revolution Square and via Avenida de los Presidentes to the residential and diplomatic quarter of Miramar with its beautiful mansions along the Quinta Avenida. After a cocktail at the garden of the legendary Hotel Nacional with stories of the Mafia in the 50’s, it’s back to Old Havana. 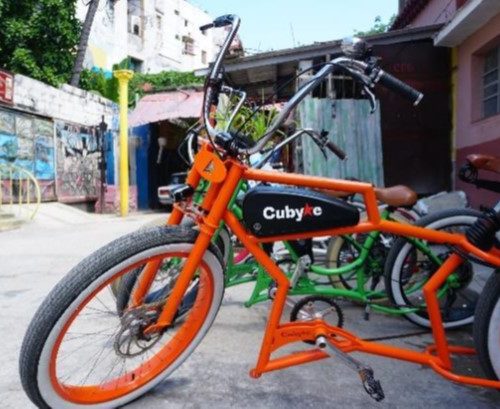 In the morning enjoy an E-Bike tour with the original Cubykes. Transfer to the starting point of the tour in Vedado from your hotel in the old city center by Coco Taxi.
During this 4-hour ‚Havana – The City Tour‘ you will visit the most popular spots and districts of Havana and get to know the most interesting historical and cultural highlights.
This tour takes you through the bustling and crowded Old Havana, Centro Habana and through the elegant residential El Vedado dirstrict with its diverse architecture. Crossing the oldest streets of the city, you pass the Capitol building, the Central Park, the Museum of the Revolution and the Prado. Lose yourself in the maze of narrow streets of the Habana Vieja. In time, you’ll end up near the historic train station of Havana in front of the famous birthplace of the poet, lawyer, and national hero José Martí. He made a real mark the history of Cuba in the XIX century. From the fortress ‘El Castillo’ you can spot the statue El Cristo on the other side of the bay as well as the fortresses ‘Castillo del Morro’ and ‘San Carlos de la Cabaña’ thus learning a little bit about Cuba’s colonial history. You continue your tour along the famous Malecón, Havanas promenade to the biggest cemetery of the American continent and the third biggest in the world: the Columbus Cemetery or Cementerio Colón 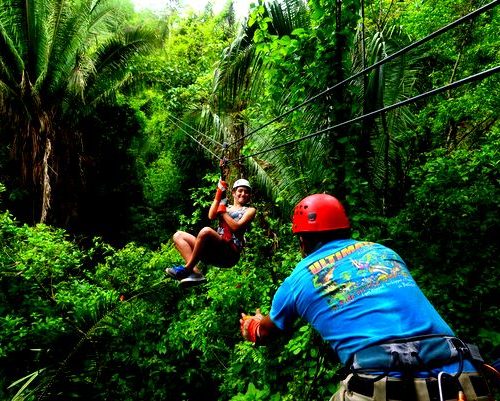 In the morning drive to the ecological community of Las Terrazas. Enjoy a panoramic tour and stroll through the village with its handicraft tradition and the nearby ruins of a former French coffee plantation ruins “Cafetal Buena Vista” with panoramic views.
Later enjoy the canopy tour while “flying” over palm trees and the lake.
Afternoon at leisure.
Distance: approximately 80km, 1.5h by car 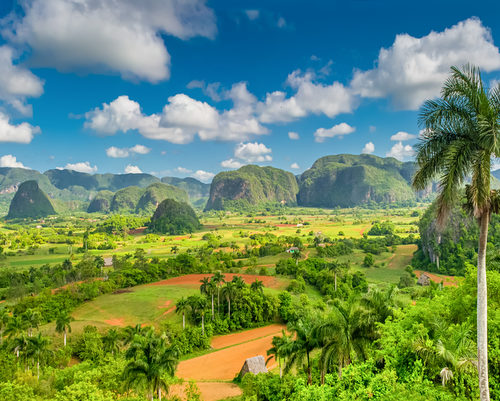 In the morning continue along to “tobacco route” to the western part of the island where the best tobacco-growing soil can be found. Enjoy breathtaking views from the mirador “Los Jazmines”. During a hiking tour you will cross the valley, which with its red, fertile land and the impressive rock formations, called mogotes, is a perfect photo spot. The camera stays ready to hand on this tour. The Viñales valley is a UNESCO world heritage site with its impressive landscape panorama and diverse vegetation. Stop at a local veguero (tobacco farmer) who will introduce you to the secrets of tobacco cultivation. While walking through a tobacco drying house you will be shown how to produce a real Cuban cigar the traditional way.
Lunch creole style e.g. at the paladar “Alberto Vitamina” or at the “Finca Agroecologica”. Later enjoy an “anti-stress” cocktail at Finca Agro-Ecologica”.
Distance: approximately 125km, 2h by car 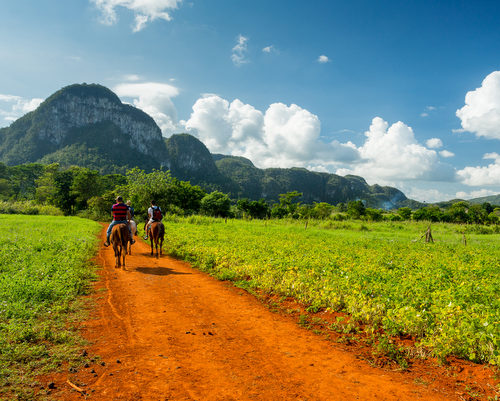 On horseback you will discover the Palmarito valley along the imposing mogotes and numerous tobacco fields. A break with seasonal fruits and creole coffee should not be missed.
Afternoon at leisure. 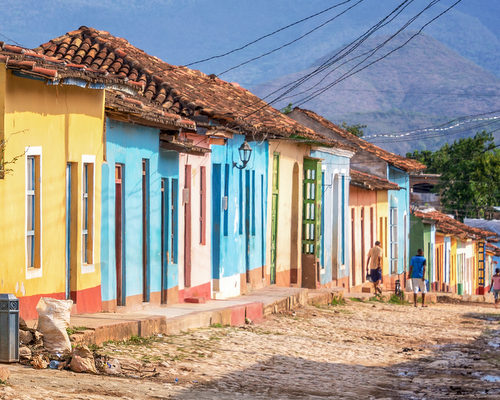 Early in the morning start for a longer trip to Central Cuba along the „autopista”, the Cuban central highway, sometimes nearly empty without traffic and where you still can encounter strange “vehicles” such as horse drawn carriages, bicycles or sleeping cows.
Stop for a refreshing swim at the snorkeling bay “Caleta Buena” in the historic Bay of Pigs. A Cuban style lunch buffet is included.
Afterwards continue to Trinidad – – UNESCO world heritage with unique colonial architecture.
Distance: approximately 320km, 4h by car 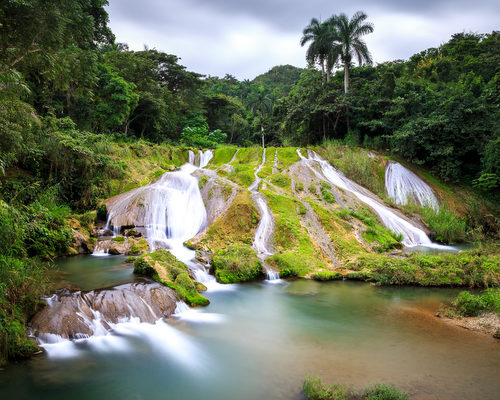 Today up into the mountain of Topes de Collantes, known for its healthy micro-climate.
Stop at the “Casa del Café y Cacao” and enjoy a freshly brewed coffee after the explanation to coffee cultivation. Later enjoy a beautiful walk on the “Guayanara Trail” through the wild Sierra Escambray. The path takes you along the “melodioso” river and through stunning nature. On the way you can take a cold shower under a waterfall and go for a refreshing swim in a natural lagoon. Afterwards lunch at the “Finca Gallega”.
In the later afternoon back to Trinidad.
Enjoy a walking tour through the cobble stone lanes and over the idyllic squares of Trinidad surrounded by the beautiful colonial mansions of former sugar barons. Visit one of several museums, e.g. the City Museum at Palacio Cantero. 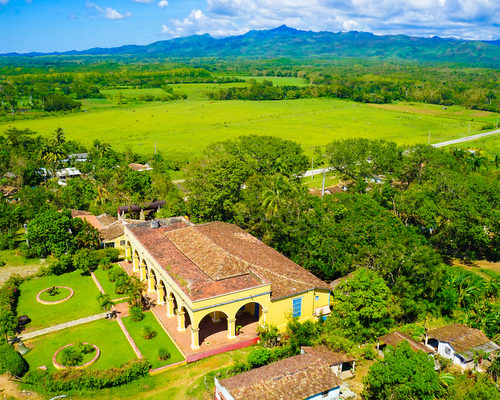 Today your tour will lead you to the Sugarmill Valley. Stop at Hacienda San Isidro with a short explanation to the history of slavery and sugar cane cultivation of the 19th century. Continue to Manaca Iznaga with the hacienda of the former sugar barons Iznaga and the legendary “Slave Tower” from where you can enjoy breath-taking panoramic views over the valley.
Afterwards continue to your beach resort in Varadero. 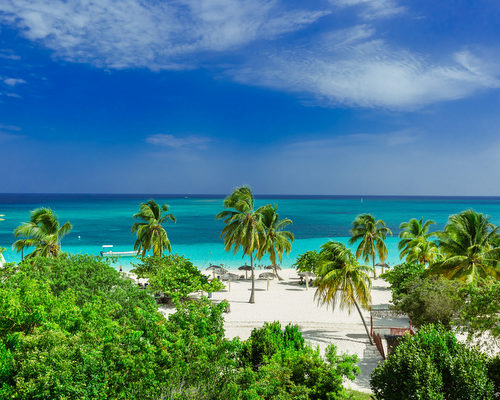 Time for a well deserved relaxation 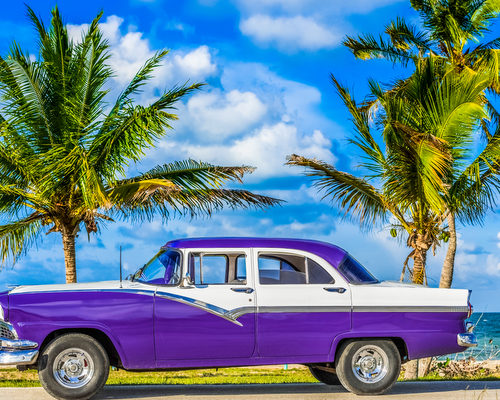 Depending on your flight time private transfer to Havana international airport.

This itinerary costs from £2,280 per person based on 4 people travelling together (accommodation in two rooms) and including all private transfers but not international flights.