Lake Bled is one of the most visited attractions in Slovenia. The beautiful views of the lake and the small island it surrounds brings thousands of visitors every year. The best way to reach the island is taking a pletna, a traditional gondola in the Bled area. Once on the island, visitors must walk up ninety-nine steps to reach the island’s church. It is considered good luck to ring the church’s bell when visiting the island.

Slovenia's capital city is as romantic and charming as they come—and clean, having been named the “Green Capital of Europe 2016” by the European Commission. Stroll through the pedestrian-only Old Town, sip coffee by the leafy banks of the Ljubljanica River, or take in the baroque architecture and hilltop sixteenth-century Ljubljana Castle.

Slovenia's second-largest city is provincial and charming, with a medieval Old Town, pedestrian-only central streets, and a skyline defined by orange roofs and rolling hills. The town is also the site of a glorious landmark: "the oldest vine in the world." Stara Trta (literally "Old Vine") is more than 400 years old, and is a symbol of the rich wine culture in Maribor.

Situated on a picturesque peninsula on the Adriatic coastline, Piran is one of Slovenia's most beautiful cities. Its pedestrian-only Old Town is reminiscent of Venice in miniature, with Gothic architecture, alfresco wine bars, narrow alleyways, and glowing sunsets.

Lipica Stud Farm has been breeding Lipizzaner horses since the sixteenth century. Once used by royals for their private stables, the farm is now open to visitors and allows them to admire this beautiful breed of horse. When visiting the Lipica Stud Farm, guests can stroll through the barns and join one of the farm’s guided tours. Three times a week the Classical Riding School performs, and guests can see the Lipizzaner horses in action.

The Triglav National Park, named after the country’s tallest mountain, is the only National Park in Slovenia. With beautiful views of the mountains, hills, lakes, rivers, and pastures, this park is a nature lover’s paradise. Aside from hiking, Triglav National Park offers great activities such as kayaking, rafting, skydiving, and parasailing.

Slovenia main airport, Jože Pučnik Airport, is located just outside its capital city and is well served by international airlines.

A small regional airport, Trieste in Italy is located about an hour away from Slovenia’s seaside resort town of Portoroz. Ryanair flies to and from Trieste multiple times a week from Stansted Airport.

The Salt pans in the Sečovlje Salina Nature Park are one of the few places in the world where sea salt is still produced by using a centuries-old method. When walking on the park trails, visitors can observe salt being harvested manually by local workers.

Planica is home to the biggest ski jumping hill in the world. For over twenty years it has hosted one of the most important ski jumping competitions in the world. In 2015 Planica received a much-needed update, and the new Planica Nordic Center was built. Aside from the ski jumps the center also features an athletics stadium, a zipline, a wind tunnel, cycling and walking paths, and a visitor’s center. Planica zipline has the steepest descent in the world, which creates the sensations that ski jumping champions feel when flying through the air.

Is this the most romantic lake in the world?
Framed by the snow-capped mountains of the Julian Alps and overlooked by a medieval castle complete with turrets, Lake Bled could have been brought to life from the pages of a fairy tale.

Special price available till the 30th of April
more 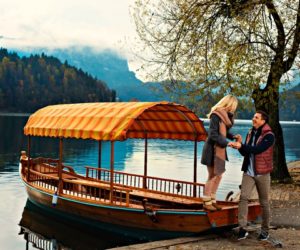 10 places that prove Slovenia is a Real Life Fairy Tale! 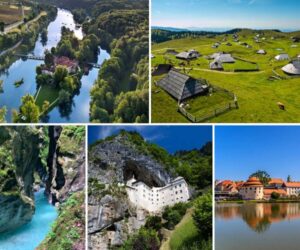 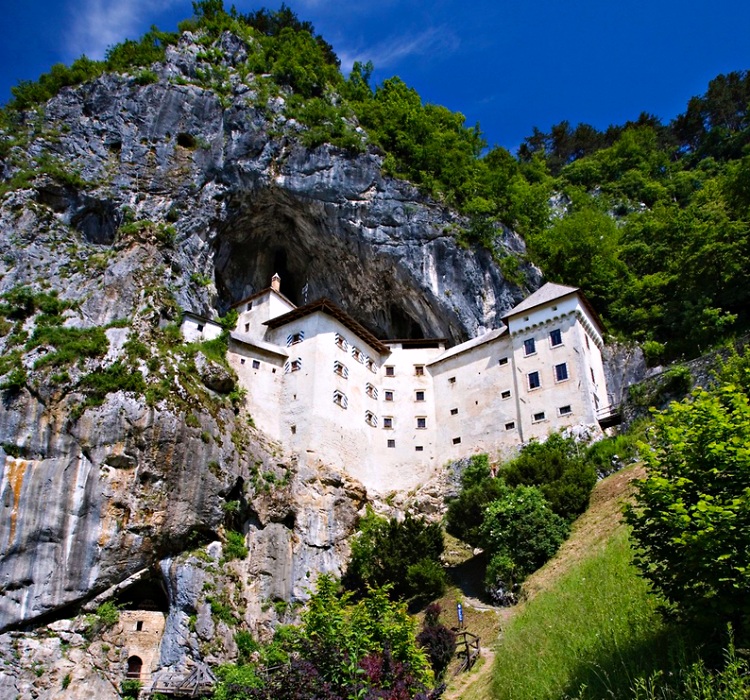 The only thing more fairytale-like than a castle is a castle perched on a 400-meter cliff that’s built around the entrance of a natural cave. Oh, and did we mention there’s a network of secret passageways? The Predjama Castle in Slovenia has all that and more.

Today, Predjama Castle is open year-round to visitors who can also buy combo tickets to see the Postojna Caves. Meet the Knight Erazem, a 15th-century robber-baron who, like Robin Hood, stole from the rich to give to the poor. A real life fairy tale hero. 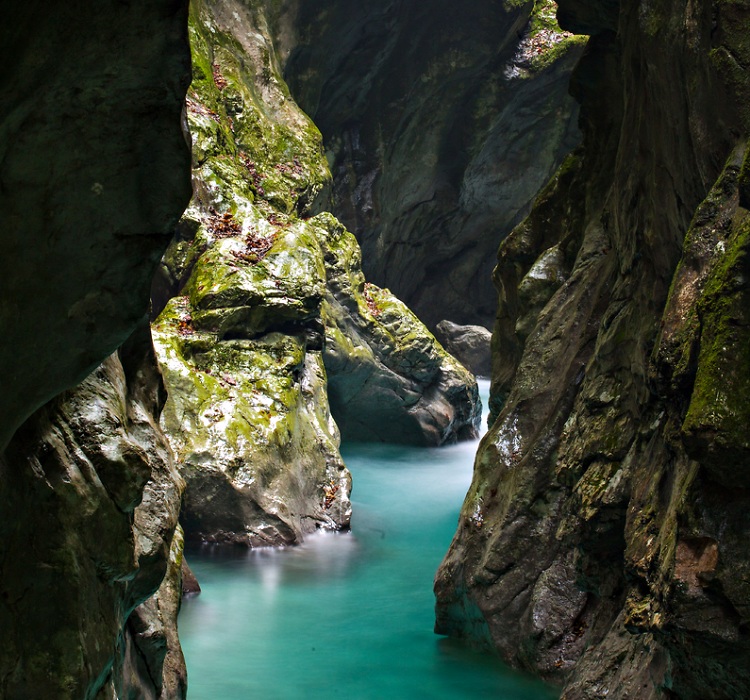 Magical and mystical, be wary the river doesn't put you under it's spell. Clear vibrant turquoise water winds its way through the deep gorge. With lookouts named Devils Bridge and Dantes Cave, you know theres going to be some interesting stories to hear.

Located in the very south of the Triglav National Park, it's a perfect stop off during a road trip of the Soca Valley. 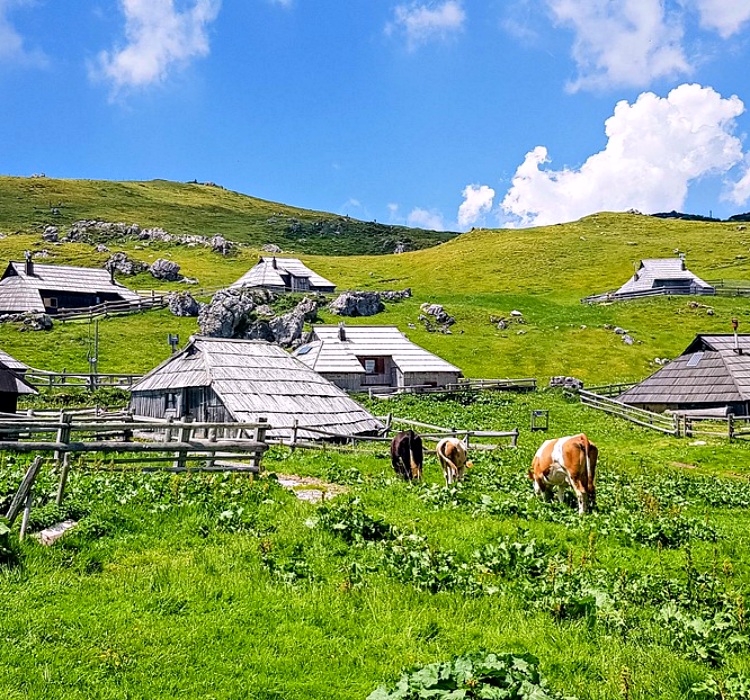 Looking like something out of middle earth. The herdsmen’s cottages on Velika Planina plateau allow you to experience the traditional Apline life.

Not far from Ljubljana, you must take cable car to reach the plateau. The surrounding mountains make it a great starting off point for hikes. 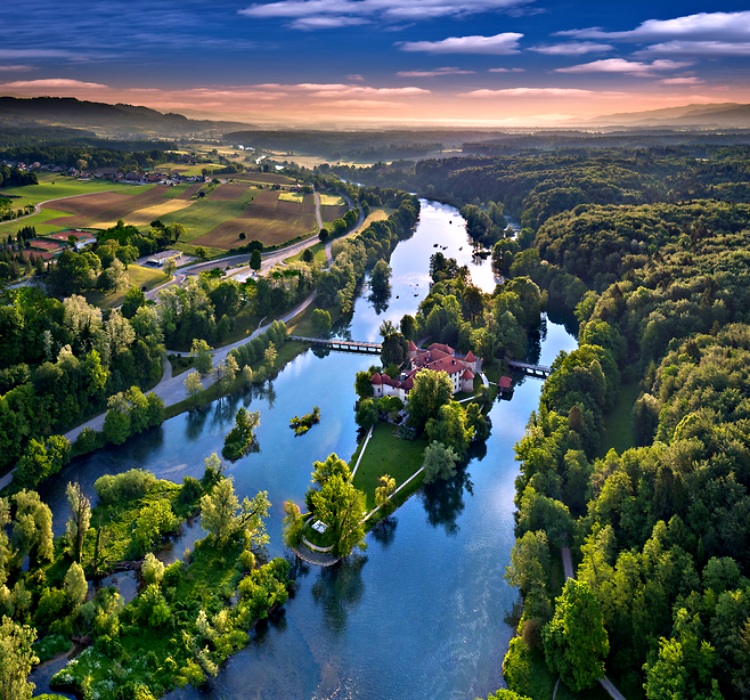 You've discovered a castle in cave, now discover one in a river! Surrounded by water Otocec Castle is a medieval fantasy come to life.

The Otocec castle is the country's most beautiful and most preserved castle. Found on a small island in the heart of river Krka, it has been transformed into a luxurious hotel. 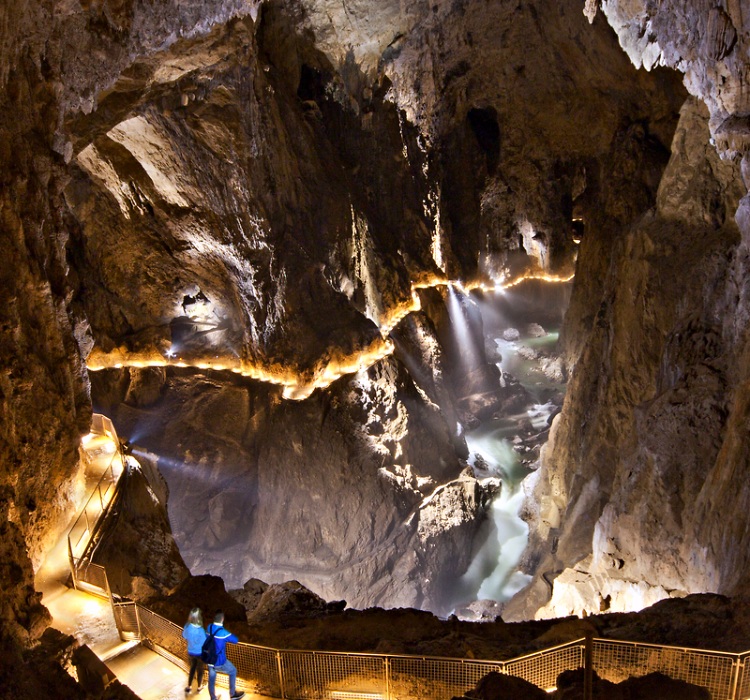 Visit an underworld thats straight out of a fantasy novel. With caves so large that the mightiest kings would have been envy of their giant halls decorated by beautiful dripstone formations.
Their beauty and unique formations are among the many reasons why they were added to the UNESCO list of World Heritage sites 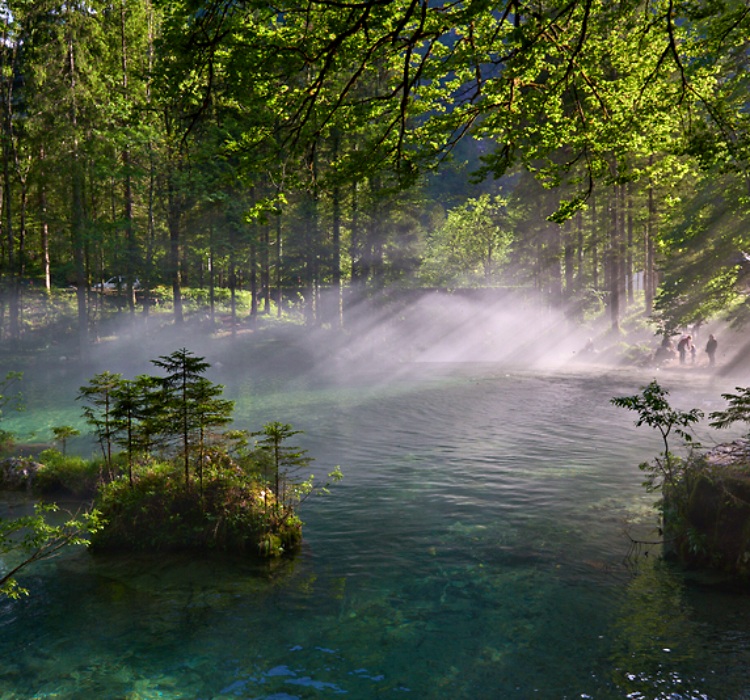 Slovenia is a green paradise. Over 60% of the country is covered in forest. Wherever you are in Slovenia your always close to a walk in the woods 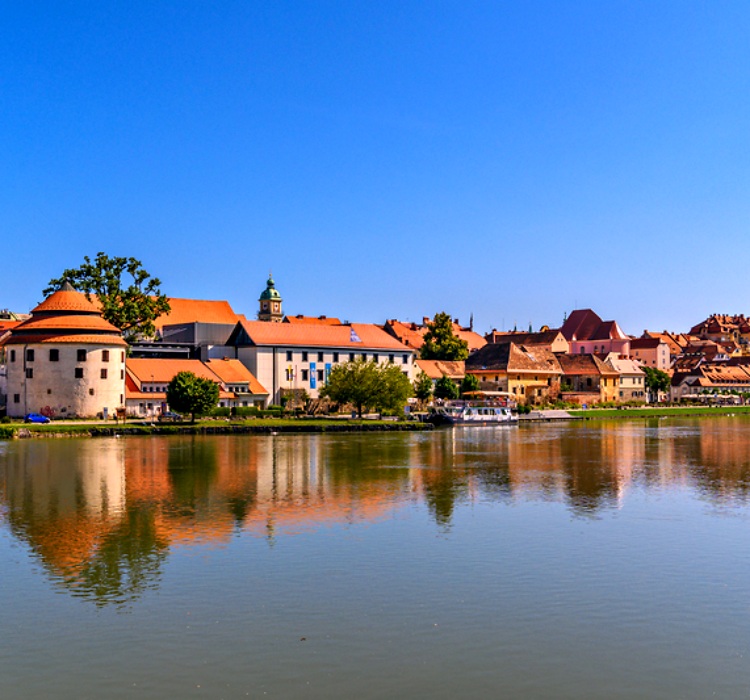 Discover the prettiest towns with streets full of colorful houses. Walking around Ptuj, Piran or Maribor one almost expects to see storybook characters tucked amongst the tourists. 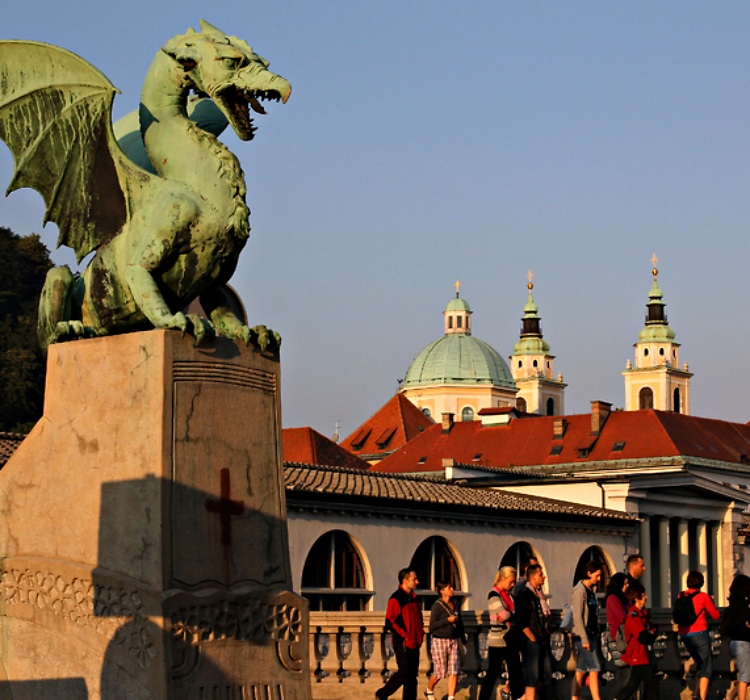 Go on a quest across the city of Ljubljana to find the mythical beasts.  Seek the legend of the greek hero Jason (yes the same Jason who stole the golden fleece and many more adventures) and help him defeat this monster.

The Symbol of the Slovenian capital, and guardian of the iconic Emperor Franz Josef Jubilee Bridge, Ljubljana’s dragon is the city’s most recognizable resident. Not only does he perch, with teeth bared and wings spread, on all four corners of the aforementioned arch, but his image also appears on the town’s coat of arms, flag, river walls, manhole covers, and even on the crest of the local soccer team. 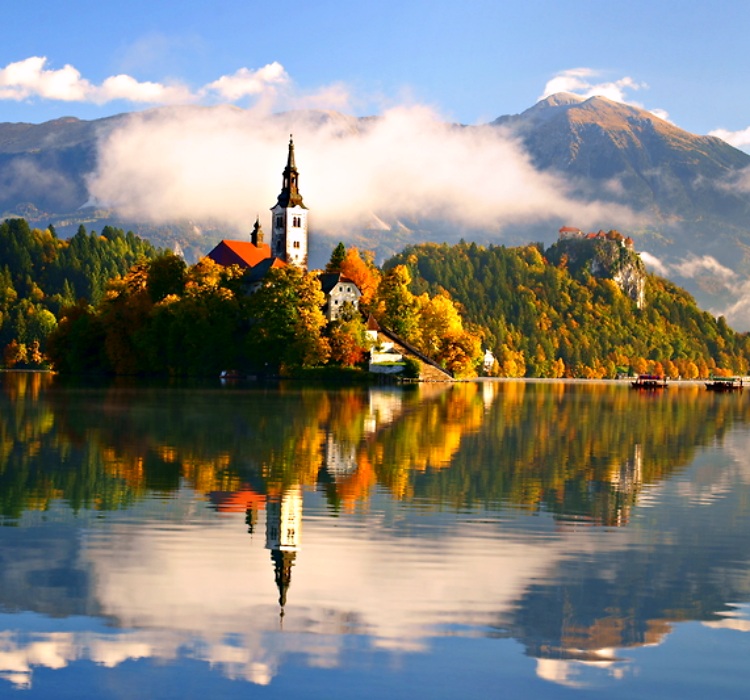 The most magical and famous fairy tale scene of Slovenia. This breathtaking alpine lake is probably the icon of Slovenia, the symbol of all the natural beauties this small country offers.

Tempted to go on your own adventure around Slovenia? Chat to Sarah and have a look at some itineraries shes put together.

10 places that prove Slovenia is a Real Life Fairy Tale!