The deserts of the Wadi Rum are simply packed with things to see and do. Whether you fancy camping and stargazing under a perfect night sky, rolling down immense sand dunes, riding in 4x4s with experienced guides, or simply pretending to be Lawrence of Arabia – here at Fleewinter we can help you do them all. You’ll discover Bedouin tented camps, fantastic natural rock bridges, ancient drawings carved into the stones thousands of years ago, all set against the gorgeous red and yellow backdrop of the desert itself. An absolute must. 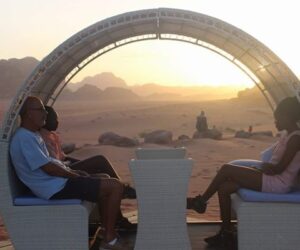 JOK001 - Khaled's Camp is situated 12 km from Rum Village and is tucked inside one of Wadi Rum protected areas. 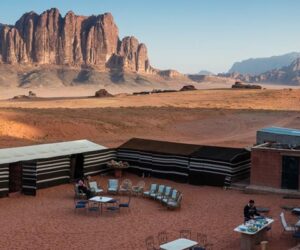 If you're looking to immerse yourself in a labyrinth of souks and bazaars, where all kinds of colourful and exotic fruits, clothes and jewellery spill out from their stalls onto the streets, then look no further than Amman. What really makes the city unique, however, is how it has managed to combine both the ancient and the modern like no other city in the region. As you wander the bustling interwoven streets that flow through the valleys of Downtown you're forever in the shadow of Jabal Al Qal'a - the highest hill in the city, and home to the sprawling ruins of the Roman citadel. In fact, wherever you go in Amman you'll find ancient history around every corner, such as the spectacular Temple of Hercules and the magisterial Umayyad Palace. When visiting Jordan, Amman is one of the must-see places on your visit.

The Roman ruins of Jerash are among the most well-preserved in the world; so well in fact that it's very easy to lose yourself in its history and imagine how it was back in its day. There's the hippodrome, where chariot races were once held, Hadrian's arch, built purposely for a visit from the emperor Adrian, and the Corinthian columns of the Temple of Artemis. If you love history make sure it's on your itinerary.

Jordan is famously home to one of the seven modern wonders of the world - the ancient, rose red city of Petra - which is so utterly captivating that it's reason alone to travel there. You arrive at Petra through the Siq, a long narrow canyon formed over many years, which gradually opens out onto the most elaborate of Petra's facades - the treasury. Carved out of sandstone onto the face of the rock itself, the size and grandeur of this sight will simply take your breath away, making it the perfect introduction to this awe-inspiring city. If you have the time, don't miss the chance to wander Petra by night - the magical, candlelit facades make for the experience of a lifetime.

The deserts of the Wadi Rum are simply packed with things to see and do. Whether you fancy camping and stargazing under a perfect night sky, rolling down immense sand dunes, riding in 4x4s with experienced guides, or simply pretending to be Lawrence of Arabia - here at FleeWinter we can help you do them all. You'll discover Bedouin tented camps, fantastic natural rock bridges, ancient drawings carved into the stones thousands of years ago, all set against the gorgeous red and yellow backdrop of the desert itself. An absolute must.

What trip to Jordan would be complete without a visit to the Dead Sea? It's impossible not to be amazed at the salinity and viscosity of the water as you wade in, desperately trying to make your foot touch the floor - something which catches all first-timers by surprise. Be sure to take a newspaper with you for the customary floating and reading pic, and be sure to treat your skin to a good soak in the rich, black, mineral-infused mud you'll find along the shore. The most beautiful health spa you'll ever visit.

The waters of Aqaba are among the most colourful in the world, so be sure to take the time to try a little snorkelling. Even right by the coast you can float over vast, sloping coral gardens but go a little further to the King Abdullah Reef in the middle of the Red Sea and you can share the water with turtles, rays, and huge shoals of brightly coloured neon fish. Be sure to take an underwater camera.

Dana is Jordan’s largest nature reserve, covering spectacular mountains and wadis along the face of the Great Rift Valley. From scorching sand dunes in the west to cool mountain tops in the east, the Dana Biosphere Reserve is home to a great variety of wildlife. There are plants and animals characteristic of true desert, of Mediterranean forests and of the dry plains of Russia. In fact, Dana is really a melting pot of species from three continents: Europe, Africa and Asia.

Madaba, known as the “City of Mosaics" is best known for its spectacular Byzantine and Umayyad mosaics. Madaba is home to the famous 6th century Mosaic Map of Jerusalem and the Holy Land. With two million pieces of vividly coloured local stone, it depicts hills and valleys, villages and towns as far as the Nile Delta.